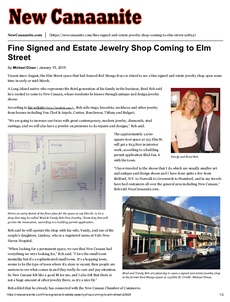 Vacant since August, the Elm Street space that had housed Red Mango froyo is slated to see a fine signed and estate jewelry shop open some time in early or mid-March.

A Long Island native who represents the third generation of his family in the business, Brad Reh said he’s excited to come to New Canaan, whose residents he knows through antique and design jewelry shows.

According to his website, Reh sells rings, bracelets, necklaces and other jewelry from houses including Van Cleef & Arpels, Cartier, Boucheron, Tiffany and Bulgari.

“We are going to increase our focus with great contemporary, modern jewelry, diamonds, stud earrings, and we will also have a jeweler on premises to do repairs and designs,” Reh said.

The approximately 1,000-square-foot space at 125 Elm St. will get a $23,800 in interior work, according to a building permit application filed Jan. 6 with the town.

“I have traveled to the shows that I do which are usually smaller art and antique and design shows and I have done quite a few from Bedford, N.Y. to Norwalk to Greenwich to Stamford, and in my travels have had customers all over the general area including New Canaan,” Reh told NewCanaanite.com.

Reh said he will operate the shop with his wife, Vandy, and one of the couple’s daughters, Lindsey, who is a registered nurse at Yale-New Haven Hospital.

“When looking for a permanent space, we saw that New Canaan had everything we were looking for,” Reh said. “I love the small town mentality but it’s a sophisticated small town. It’s a hopping town, seems to be the type of town where if a store is vacant, then people are anxious to see what comes in and they really do care and pay attention. So New Canaan felt like a good fit for me, and I also felt that there is not a huge amount of other jewelry there, so it’s a nice fit.”

Reh added that he already has connected with the New Canaan Chamber of Commerce.

In New Canaan, Henry C. Reid & Son on Elm Street has been in the process of closing since November, according to signs posted in the store.

Asked about Reh, chamber Executive Director Tucker Murphy said she’d first connected with him about one year ago “and I am so pleased that he chose New Canaan for his Connecticut store.”

“We have already discussed ways for him to get involved,” Murphy said.

Reh said he started out working 25 years ago with his mother and her husband in Southampton, a place he felt was not a community where he wanted to live year-round.

The Rehs are planning now to move to Connecticut, he said.

The new shop could be called ‘Brad and Vandy Reh Fine Jewelry,’ he said.